Home Start Here About The Gym About Me Apply Today Blog How do I know if my gym will succeed? Use the napkin test. Minimizing the risk of starting a gym....

How do you know if your gym is going to be successful?

I have not the slightest clue.

You weren't expecting that, were you?

Opening a gym is a risk. With so many variables, it's hard to know for sure if it's going to be a success until you start asking your customers to trade their hard-earned money for your product/service. Everything before that point in time is just lip service.

Anyone who tells you differently is either overconfident or a liar. Plain and simple.

However, what I have found is that there is a simple test that will immediately tell if it's NOT going to work.

It can save you thousands of dollars and hours upon hours of wasted work.

It's the napkin test, and it goes like this...

If you can't write out your financial projections on the back of a napkin and show your break-even point and profitability, it's probably not going to work (unless of course, you're Jeff Bezos, Elon Musk, or Richard Branson). And if it takes you more than one napkin, it's too complex. Go back to the drawing board and simplify it.

After the debacle I had creating an online platform for local businesses almost 6 years ago, I started using the napkin test. In fact, any time I talk business with anyone, we always go straight to the napkin before we get too deep into the conversation.

Here's what the napkin looked like that convinced us to open a spin-only gym, Flow. 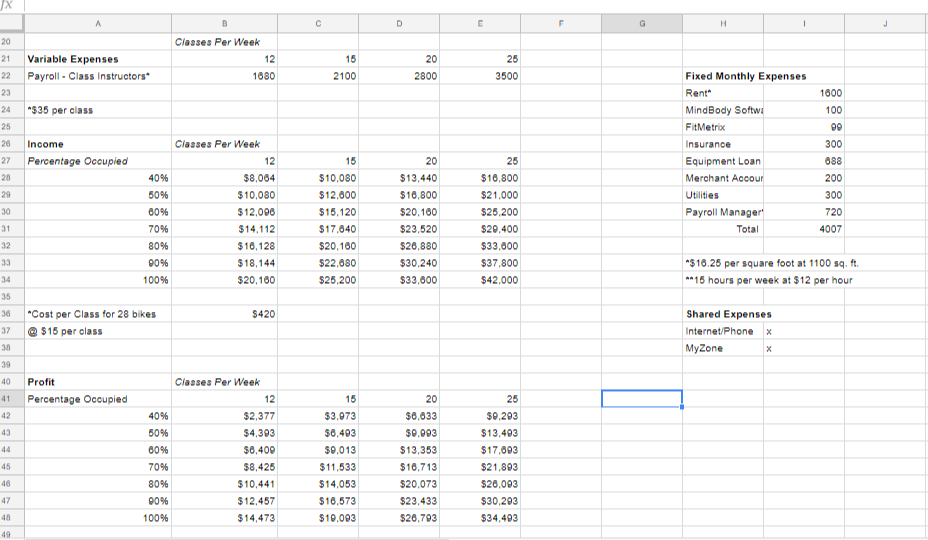 Side note: I know this an image of a spreadsheet, not a napkin, but my handwriting was so bad my partners convinced me to put it in a spreadsheet and email it to them. Plus, the spreadsheet allows me to change one variable and see how it affects everything. For example, let's say we decide to charge $12 per class instead of $15. With a single click of the mouse, I can see how that is going to affect income and profitability at every class level and participation rate. We can play best-case, worst-case, and most-likely case scenario in just minutes, which is awesome.

See how easily the business idea can be explained by numbers. I didn't have to say a word. Everything is there.

It should always be that easy if you're starting a business.

Unfortunately, It wasn't that easy with the online shopping platform I created, which should have immediately been a red flag. I was missing expenses, critical ones like monthly server cost. Worse yet, I didn't even know what my primary revenue stream was going to be. Was I going to charge small businesses for having an online store on the site? Or, was I going to take a percentage of sales from each store? Or, was I going to rely on advertising money from merchants who wanted to be featured or sponsor the weekly "deals" email? I hadn't a clue. I simply had a blank napkin.

No one understood the business and looking back, I don't think I did either. It was an idea with a lot of holes, and those holes would have been exposed had I put it on the back of a napkin.

If you're opening a gym. get out your napkin. I've given you all the numbers you need. You just have to apply them to your market.

Sit down and do it. Can they fit on the back of one napkin?

If not, wait for a better opportunity.

Can you afford to open a 24 hour HomeTown Gym? Find out here and get the exact startup costs.